Le Sentinelle is the top of the line in Mantellassi’s Morellino di Scansano DOCG production. It takes its name from the hillside vineyard where the grapes are grown. This wine is produced with Morellino grapes: a Sangiovese clone which gave its name to the DOCG appellation. In cooperation with the Vivai Cooperativi Rauscedo, Mantellassi carried out a clonal selection of the Morellino variety in the Le Sentinelle vineyard. Thanks to this initiative, the three Sangiovese-Morellino clones in Italy were officially recognized for the first time. Grapes are carefully selected and go through a traditional red wine vinification in small capacity tanks with prolonged maceration on the skins. Aged 20 months in French oak barriques, followed by several months in the bottle. 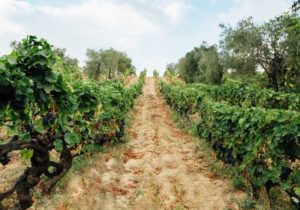 Fattoria Mantellassi is one of our long-time collaborators in this adventure. Mantellassi director Riccardo Pecchioli is an old friend, going all the way back to Jody’s first trip to Italy to study cheesemaking. He’s a third-level sommelier, with profound knowledge and deep passion for Italian wine. He helps us discover new wines to import, and we’re always delighted to visit with him when we’re there.

Mantellassi’s vineyards sit close to the ocean, in the foothills, and benefit from the mild weather and cool breezes.

“Labor omnia vincit” — “Work conquers all” — this motto reflects the tenacity and dedication to work of the owners of the Mantellassi Farm in Magliano in Tuscany. The Mantellassi family originally came from Pistoia, then moved to the area of Scansano and Magliano in the 1860s where they worked as “pruners” and “grafters.”

Always winemakers, in 1960 they began laying the foundation of the first ten acres of the vineyard at Banditaccia, reaching up to the current 240 acres. These span across some of the many hills of the farm, where the vineyards consist mainly of Sangiovese grapes, along with Alicante, Cabernet Sauvignon, Morellino, Merlot, Canaiolo Nero, Malvasia Nera, Ciliegiolo, Vermentino Bianco and Sauvignon Blanc.

The Mantellassi Farm has contributed significantly to the establishment of the Controlled Designation of Origin of Morellino di Scansano in 1978 and is considered one of the most prestigious producing companies in the region.

Be the first to review “2015 Mantellassi Le Sentinelle” Cancel reply